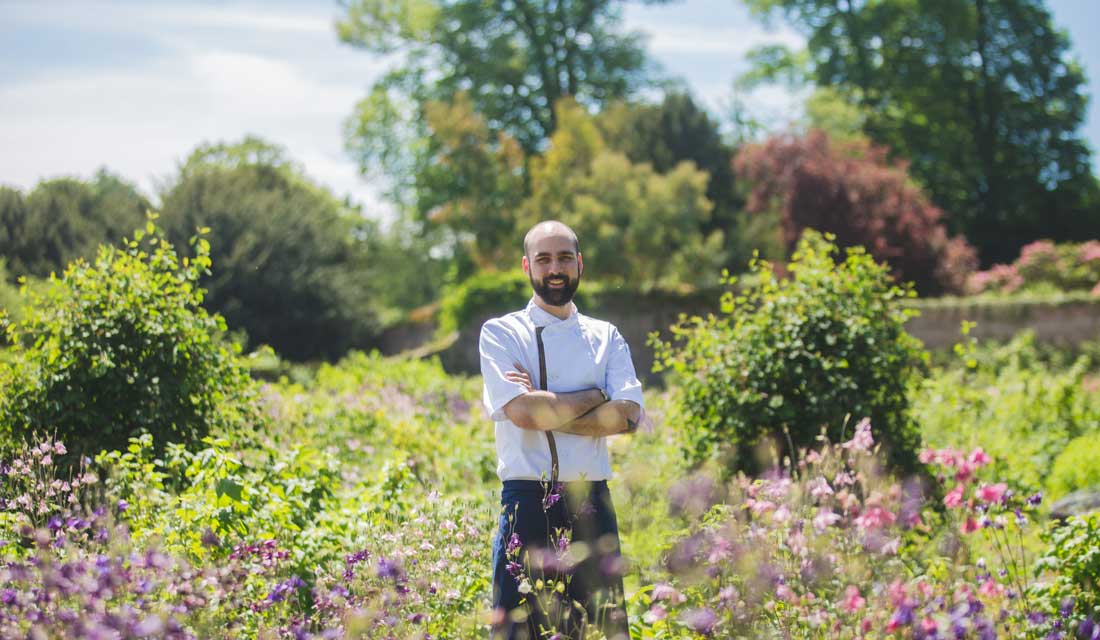 Kevin Hughes is a lucky chef – he has a 20,000-acre larder on his doorstep. And it’s all thanks to a phone call from a friend. One day, while he was teaching at Leeds City College, someone rang him to let him know about an opportunity that had sprung up in the kitchens of Swinton Cookery School, set in the heart of a vast North Yorkshire private estate. Kevin applied (what’s the worst that could happen?’, he figured), met the estate team and one 2.5-hour interview/demonstration session later (delivered entirely off the cuff) found himself in charge of the kitchens.

Anyone who has tasted Kevin’s food won’t be surprised he bagged the job. Having spent the first 18 years of his life in South-East Asia, Kevin has picked up a gift for the region’s flavours, and channels his talents to weave Asian tastes into British culinary tradition to create new and exciting dishes. Today, he’s never happier than when he’s in the classroom, exploring his latest discovery from the kitchen garden, talking nervous cooks through the intricacies of the soufflé, or simply sharing his passion for the power of food to tell a story…

You grew up in South East Asia – can you tell us where and how this influenced your cooking style?

Growing up in South East Asia greatly influenced my style and approach towards cooking. We moved there when I was four months old, and my brother and I didn’t move back until we were 18. Coming back to the UK was a serious culture shock, and food became my happy place (especially during winter). Further along in my career, I used my influences to create Modern British dishes with authentic Asian flavours – this led me to two third place positions and a second place in the UK South Asian Chef competition, along with other competitions along the way. My favourite style of food is good-quality, home-cooked, family sharing meals – I am a believer that eating isn’t about the food but the experience and sharing them with others.

What’s the best part of your job?

Meeting new people every day. Their stories, past experiences, sense of humour and just general kindness make it the best part of my job. As corny as it sounds, people arrive customers and leave friends!

Do you have a favourite course/topic/dish that you teach?

My favourite courses are the Modern World Street Food and South East Asian course. They are the ones from which I really struggle to not nick any of the food! These are the foods I grew up on so I love sharing the stories of how I got the recipes and some of the good times I had sharing these dishes with friends and family.

What’s your favourite thing about working at Swinton?

It’s easily the access to the wild ingredients, whether it’s the venison fresh from our deer park or grouse from the North Yorkshire Moors, right down to the humble beetroot handpicked from the garden. I’ve never seen anything like it before and I don’t think many other places can offer anything comparable.

You’re known for having an affinity with ingredients and flavours of the Yorkshire Dales – what sort of things are we talking about and what makes them so special?

We are blessed at Swinton to have a fantastic four-acre walled garden and wonderful game coming from the 22,000-acre estate. Working here has been a real learning curve, getting to grips with new ingredients and realising new things about the old (especially when there is a glut in the garden!) One of my favourite ingredients are the Siberian kiwis grown in the garden. Before working here I had never even heard of them, and now I check them every week to see how far along they are so I can get them back on the menu! I am a huge fan of letting the ingredients do the talking and not overcomplicating a dish, so being able to go and pick items from the garden and simply sharing my wonder at the discovery of a new ingredient is really lovely.

What ingredients do you source from the walled garden, and what sort of things do you make with them?

We source as much as we can from the garden, having regular conversations with the head gardener (the owner’s mum) and doing what seems to be aimless wandering but is actually new-ingredient hunting, honest! We make chutneys, jams and more, and we use them regularly for the courses and our chef table dinners every Friday night. These ingredients tell a story and can give customers a true taste of Swinton and North Yorkshire.

How often do you introduce new classes, and how do you decide what to teach?

We generally introduce new classes every year. We have done more regularly in the past but I believe in getting a class right before running it. I prefer to put the dishes through the paces and will sometimes test out a class on the staff here first.

Do you think some people are just bad cooks? Or can everyone be saved?

There is no such thing as a bad cook! If I can cook so can everyone else! I truly believe that the nicest thing someone can do for you is cook you a meal; the time spent and the thought of what they want to cook is very lovely. People who often consider themselves bad cooks always bite off more than they can chew and this puts them in the position where they believed they’ve failed when they have simply learned something new about the recipe. This is how all chefs start out – we aren’t better than anyone else; we’ve simply messed it up more!

What do you think is the trickiest dish you teach in your classes?

I am a firm believer that no dish or technique is tricky – more that you need time to figure it out. People tend to jump to soufflé as a really tough skill to crack, but as long as you follow the rules and the recipe you will be fine. We had six months’ worth of successful sweet soufflés in my first year here.

If someone came to you having never cooked before, what dish would you start them off on?

The best dish to start off on would be spaghetti bolognese; it’s just a good all-rounder. You can cover some basics in there and also show them how to change it up a bit so you have some different flavours going on. What we like to do in our house is add some curry paste or powder to the meat sauce and have Bombay Bolognese – to this day no one has complained when my wife and I have served it up.

Are there any ingredients that you don’t actually like?

Believe it or not, I really hate the texture of tomatoes! I love the flavour and love using them in cooking but the texture of raw tomatoes really isn’t my friend.

What are your three desert-island dishes?

I am quarter Indian, half Irish and quarter English, but I grew up in South-East Asia so whenever we came back to the UK my nan would whip up keema peas with boiled rice and fresh naans and all the family would cram into the two-up two-down and fight for the biggest portion. Then we had to fight off the hungry cousins (all 16 of them) and the dogs. I have fabulous memories around this dish and every time we have it I go straight back to them.

My wife makes a mean eggs ben. I wish I could say I taught her everything she knows but she taught herself most of it! It’s great on those rare Sundays off we have together – it always tastes so good!

My final choice is flatbread and curry breakfast dish from Malaysia. Salim’s Café was the best around and we lived round the corner from it. My brother and I would regularly go for breakfast, lunch and dinner. Roti canai with Teh Tarik (a sweetened pulled tea) was absolutely awesome!